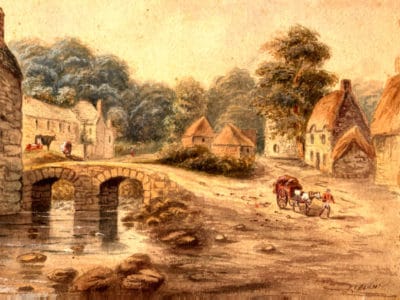 Film and discussion about John Blight:  Artist, Archaeologist and Writer by Selina Bates and Keith Spurgen

John Blight, the eldest son of a school teacher, grew up in Penzance and by his early 20s had made a name for himself as an accomplished artist and chronicler of the land he loved so well. He sketched, painted and engraved the ancient crosses of Cornwall, its churches, sites of antiquity and natural phenomena. His work was endorsed by the Prince Regent and attracted the attention of Robert Stephen Hawker and James Halliwell-Phillipps, literary celebrities of their day. At Blight’s suggestion the Royal Institution of Cornwall began to collect works of art for a scrap-book of Cornish subjects. He was also a luminary of the Penzance Antiquarian and Natural History Society.

When Halliwell-Phillipps engaged Blight to record the sites of Stratford connected with Shakespeare, the young artist’s fame (and perhaps fortune), seemed assured.

From this time on, however, his luck began to change. He became depressed by having to take long journeys, working hard and long hours for very little financial reward. The life of a gentleman eluded him and he seemed never to be able to settle down and earn a steady wage. The result was a breakdown; ill health and the fixation that he was married to Evelina Pidwell. Aged 35 he was taken to St. Lawrence’s Asylum, Bodmin, where he was to remain for 40 years — the rest of his life.

Was this a life lost? — as Blight himself once called it. Selina Bates and Keith Spurgin, following clues left by Peter Poole and Charles Thomas, have unearthed some of the fascinating details of how a C19th asylum was run. Much of what Blight recorded seems to challenge our view of how inmates lived and were cared for. In addition, the very end of his story brings a realisation so unexpected as to rival the denouement of a Victorian novel.