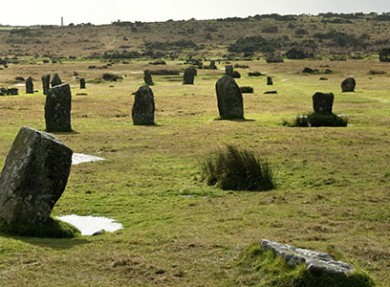 The Hurlers Stone Circles are some of the best-preserved ceremonial circles in the South West. The Bronze Age site comprises of three separate circles made up from between 9 and 24 large granite stones and is thought to date back to 1500BC.

The stone circles were constructed strategically, with the River Fowey to the West and the River Lynher, which feeds the Tamar to the East. This, and the fact that many other important prehistoric monuments including the Bronze Age burial chamber Rillaton Barrow surround the Hurlers, suggests that these pre-historic monuments were once part of an important processional route on Bodmin moor frequented by traders and travellers.

The name The Hurlers was recorded by the Historian William Camden in 1610 -explaining that the circles are made from the remains of men petrified and turned to stone for playing the Celtic game of Hurling on a Sunday.

The Hurlers are a fascinating Cornish landmark and are free to explore within reasonable daylight hours.

The recently restored Houseman’s Engine House, which is home to a permanent exhibition on the history and nature of the surrounding area.