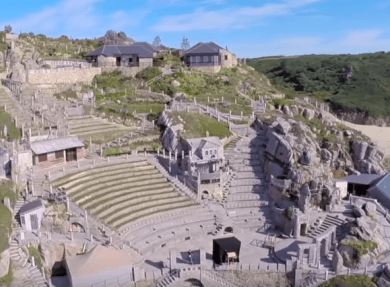 An iconic Cornish landmark, the world-famous Minack is an open-air theatre carved into a granite cliff at Porthcurno.

Originally a sloping cliff covered in gorse with a ninety-foot drop to the sea below, the Minack came about due to the sheer hard graft of an extraordinary woman, Rowena Cade.

Having bought the Minack Headland in the early 1920s for £100, Rowena built her home Minack House – which you can still see on the cliff top as you approach the theatre today. In 1929 Rowena became involved with a local open-air production of Shakespeare’s A Midsummer Night’s Dream. When they wished to stage The Tempest two years later, Rowena offered them the use of her cliff garden for the performance – creating the need for seating and a place for the acting to take place – something that would start a life-long project.

The Minack was built by hand over the course of the rest of Rowena’s life with the aid of helpers who worked largely with hand tools (and the occasional stick of dynamite) to shape the theatre we see today. The story of this incredible process can be found at the Minack Exhibition Centre.

Each year over 200 live performances take place at the Minack, with the stunning views of Porthcurno Bay behind providing a spectacular backdrop. From plays to opera, musicals to children’s events, there’s something for everyone.

The opportunity to explore the Exhibition Centre where you can find out about the history of the Minack and even see some of the original costumes made by Rowena Cade.