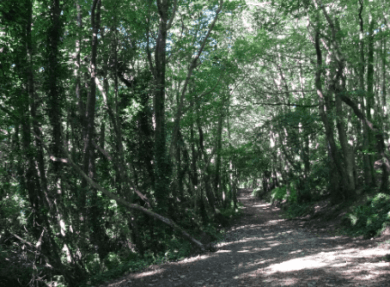 Managed by Cornwall Council, Tehidy is the largest area of woodland in west Cornwall, with over 9 miles of paths and 250 acres of woodland and lakes to explore.

Once part of the Bassett family estate, with a lineage that dated back to Norman times, the area has quite a history.

In 1716 the Bassetts - who were one of the four most powerful families in Cornwall - built a mansion here from the profits made from their copper mines. Famous names such as Richard Trevithick were amongst the visitors to the property where he would discuss his ideas.

In 1779, owner Sir Francis Bassett became a national figure, being named Baron de Dunstanville after marching his miners to Plymouth to help defend the city against the combined fleets of France and Spain who were anchored off the Devon shore. Bassett was well known for looking after his workers, doing much to improve their lives - the Carn Brea monument was erected in his honour following his death in 1835.

It was in 1916 that the Bassetts’ 700 years of ownership came to an end when Tehidy was sold. Just three years later the mansion became a TB hospital only to mysteriously burn down two weeks later.

With a variety of different routes to choose from, there are five main access points to the woods, as well as a café and picnic area where you can enjoy some refreshments.

A beautiful part of Cornwall to explore, Tehidy is well worth a visit.

The variety of colour coded footpaths and cycle routes available to try.

The chance to visit the woods during the different seasons and see their rich flora and fauna.