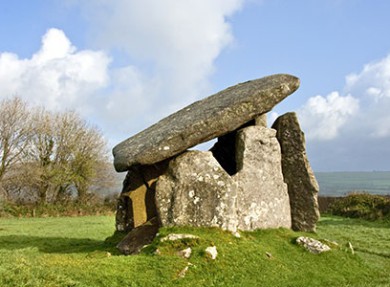 Thought to be one of the best-preserved portal dolman burial chambers in Britain - Treverthy Quoit dates back to 3000BC.

Known locally as the Giant’s House, the Neolithic structure stands at over 10ft high and comprises five upright stones - supporting the capstone (measuring over 12ft long and weighing over 20tonnes) at a distinctive angle.

Tombs of this type would have typically been covered with a large mound; remnants dictate that the encompassing mound would have measured over 7 metres in circumference.

An interesting Cornish landmark – Trethevy Quoit is well worth exploring when visiting the county.

That Trethevy Quoit is free for the public to explore during reasonable daylight hours.