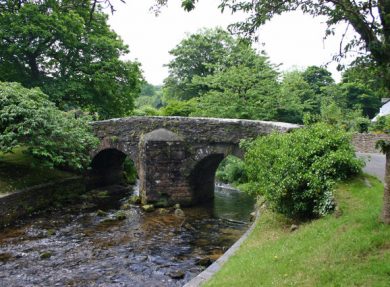 Perched on the eastern edge of Bodmin Moor, Altarnun is one of the prettiest inland villages in Cornwall. Turning off the A30 west of Launceston, a narrow lane shaded by trees snakes down from the popular King’s Head pub at Five Lanes into the heart of the community and its granite dwellings.

A packhorse bridge spans Penpont Water – a tributary of the River Inny – and leads to the Grade I listed Church of St Nonna, also known as the Cathedral of the Moors, from which the village takes its name. Largely 15th century, there is still evidence of the building’s Norman origins, including the stone font. More recently the church was the venue for the wedding of Doc Martin (played by Martin Clunes) in the popular TV series.

Next door is the old rectory, immortalised by Daphne du Maurier in her novel Jamaica Inn as the home of her character Francis Davey, the not so holy vicar of Altarnun.

The 79 exquisite 16th century carvings by Robert Daye on the ends of the wooden pews in St Nonna’s Church. One features a rare image of a musician playing the Cornish bagpipes.

The stone carving of evangelist and Methodist movement founder John Wesley over the door of the former chapel. It is the work of noted 19th century sculptor Neville Northey Burnard who was born in the house next door.