We Are Cornwall > Towns > Helford Village 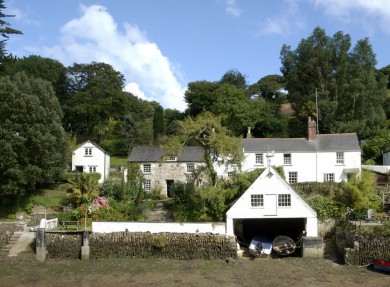 The Helford River is in a flooded valley with many tributaries joining it on its way to the sea, passing Helford Village on the south bank just before it reaches Falmouth Bay.

The village once was a thriving trading port, dealing in lace, rum and tobacco with duty collected in the old customs house. During the Napoleonic wars there were, shall we say, less “regulated” visitors in the form of pirates and free traders.

Today Helford is peaceful, one of the unspoilt corners of Cornwall where life is conducted at a quieter pace. Several great estates were established in the area and Victorian plant hunters returned with exotic specimens that underlined the wealth of local families. Gardens like Trebah and Glendurgan, with their sheltered, sub-tropical environments, have tree ferns, rhododendrons and azaleas which thrive in the mild Cornish climate.

The romance of this part of the Helford River, as described by Daphne du Maurier in her romantic novel Frenchman’s Creek, inspired by the Helford tributary of the same name which can be found at the top of Helford Village.

The Helford passenger ferry which runs from Helford Village on the south bank to Helford Passage on the north bank, connecting locals, visitors and walkers exploring the South West Coast Path.