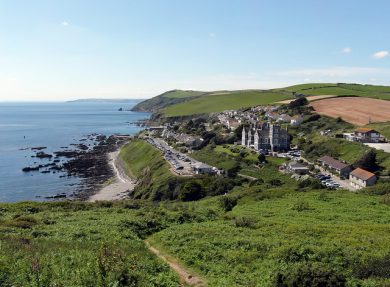 The tiny South East Cornwall village of Portwrinkle on the Rame Peninsula captures the essence of Cornish life in a bygone age – by day a busy harbour landing rich catches of pilchard and by night the haunt of smugglers who used the rocky cliffs and coves as cover for their illicit trade.

The adjacent Finnygook Beach is said to have taken its name from Silas Finn, a smuggler who ran his empire along the coast heavily disguised as a woman to avoid capture. His luck ran out and, to avoid the gallows, struck a deal with the excise men that betrayed his fellow smugglers and led to their arrest. His ghost, haunted by remorse, is said to roam the cliffs.

Apart from the names, remnants from the past survive in the old cottages and fish cellars at the village which looks out on to beautiful Whitsand Bay. Portwrinkle is unspoilt with good, sandy beaches sheltered by cliffs including Finnygook Beach and Hoodny Cove, with lots of rockpools to explore.

There is parking at the beach, which is on the South West Coast Path, toilets and a beach cafe at Finygook.

The Jolly Roger Café, even if it’s just for a cup of coffee, because of the amazing views out to sea from inside and on the decking. There’s also the lovely Finnygook Inn in Crafthole, en route to the beach.

This is the place for wildlife. Dolphins and seals can often be spotted just offshore in the clear waters of Whitsand Bay, which is a Marine Conservation Zone. So bring your binoculars!