Never been to… Tehidy Woods

When you’re alone, do you ever get the feeling that you aren’t?  A friend of mine, scientific to his very core, surprised me by saying that, on a madcap solo sailing adventure to South America, he became convinced there was someone else onboard.  The feeling didn’t appear to frighten him – he just accepted that there was a presence there.

Do I believe in ghosts?  Absolutely.  Not perhaps the stereotypical white sheet phantom beloved of Halloween parties – mine, like my friend’s mysterious boat companion, tend to be more subtle.  Having said that, a sinister experience in a Dordogne holiday cottage more than a decade ago had all the characteristics of a Gothic horror.

I was staying there with my then teenage daughters. I’ve always loved old properties so the one I’d chosen ticked all the right boxes – except for the atmosphere.  From the moment we stepped foot inside, I think we all felt something but gamely got on with making the most of the sun, sweltering heat, lovely countryside and a beautiful outdoor pool. Until our final evening. That was when the clouds rolled in, turned a menacing black and a twelve-hour storm commenced.  I’ve never known thunder and lightening like it. Worried that there would be a power cut, I found some candles and suggested that we all share my room for the night – an invitation that was readily accepted.

We went up the creaking staircase with all the lights on and started preparing for bed.  Deciding she wanted a drink, Rosanna, my eldest, went back down to the kitchen.  At the bottom of the stairs was a mirror.  As Rosanna passed it the unmistakable reflection of an old woman appeared.  The face was neither gentle nor kind and my daughter – the least likely member of our family to see ghostly apparitions – was understandably terrified.  I didn’t see it (I didn’t go to look!) and we didn’t tell Rebecca what had happened until the morning after. Nevertheless as we threw our bags into the car and bade farewell to that strange, dark place, we all knew that somehow boundaries had been crossed and our concept of what was normal, real and reassuringly tangible had forever been challenged. 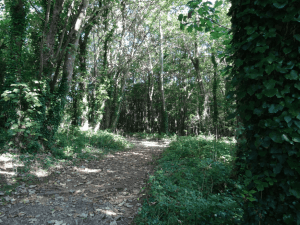 Why am I telling you all this in an article about my first trip to Tehidy Woods?  Because, in deciding where to go for a Sunday morning dog walk, I came across a story about four fourteen year old boys camping out there one night.  The author, Martin Bolton, recounts how they thought they heard people shouting during the evening and how, during the night, the noises intensified.  They say they saw shadows on the tent of what looked like men with axes and could hear the sounds of dogs, horses and even a carriage. One of the boys bravely ventured outside – only to return minutes later white faced and petrified.

Tehidy is now a country park managed by Cornwall Council.  For centuries, though, it was a Bassett family estate with an impressive lineage that dated back to Norman times.  With profits from their copper mines, the family built a mansion in 1716 that soon became a magnet for the county’s rich and powerful - with the likes of engineering pioneer Richard Trevithick regularly visiting to discuss his ideas.  In 1779 Tehidy owner Francis Bassett became a national figure and received a peerage for marching his miners to Plymouth to help defend the city against the combined fleets of France and Spain that had anchored off the Devon shore and, from 1798 to 1842, 400 acres of Tehidy land became home to the many men working in local mines.  When Sir Francis Bassett died in 1835, 20,000 people and 150 carriages gathered on the estate to pay their respects – the Carn Brea monument was erected in his honour. 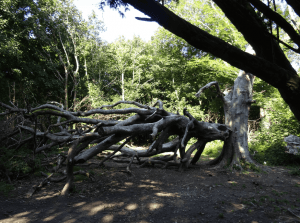 700 years of Bassett rule came to an end in 1916 when Tehidy was sold.  Three years later the mansion was turned into a TB hospital but, just two weeks after opening, mysteriously burnt down – some say by ghostly arsonists.

We all need space and time to think, wonder and explore and Tehidy Woods, with its 250 acres of trees, lakes and footpaths, gave me that opportunity.  I’d chosen to walk early in the day, when there were few other visitors about, and, with my head full of supernatural tales, it wasn’t hard to imagine why lives that had gone before might suddenly manifest themselves under the oak leaves or in the darker copses.

It’s a beautiful, magical place with plenty to offer solo, reflective travellers like me or couples, families and groups.

I didn’t (thank goodness) encounter any visions but I did immerse and enjoy myself in a place that undoubtedly bridges time.