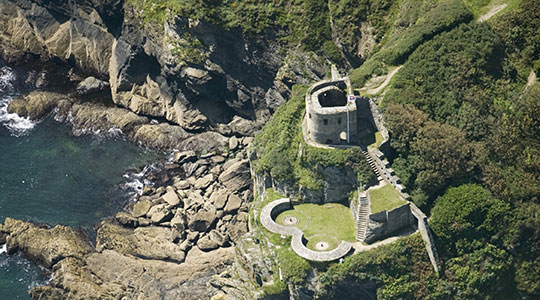 It’s not hard to see why St Catherine’s Castle at the mouth of the Fowey estuary was built. Positioned on a promontory looking out across the English Channel, it’s the perfect place to keep watch for enemy ships. At the time of its construction, Henry VIII had upset Rome and the Catholic world by insisting on divorce from Queen Catherine. Invasion was a real possibility so the King ordered more coastal defences. Local landowner Thomas Treffry, whose family had become rich after supporting Henry VII during the Wars of the Roses, obliged by building St Catherine’s and, further down the coast, St Mawes castles. 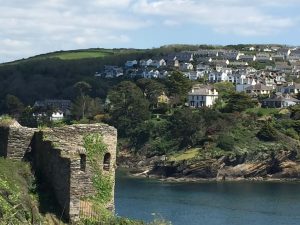 The fort was never used in anger – neither in Tudor times when it came into being nor during the Second World War when anti-aircraft guns were positioned there. Today it’s a ruin that’s conserved by English Heritage and visited by plenty of people each year. Entry is free and the views across to Polruan, down the river to Fowey and over to St Austell Bay and The Roseland Peninsula are simply breathtaking.

There are no nearby roads so access is either the path up from Readymoney Cove below or via The Saints Way - a long-distance footpath which follows the route that early Christian travellers would have taken when making their way from Ireland to Europe. I’d parked on the Fowey side and enjoyed a stroll down to the beach before the gentle woodland climb to the castle.

As a Daphne du Maurier fan, I loved the fact that the author had lived in Readmoney Cottage during the war (writing her less well-known novel Hungry Hill there) before moving on to Menabilly a little further on along the headland. The latter was the thinly-disguised inspiration for Manderley in Rebecca so the whole area is one that she would undoubtedly have known like the back of her hand. Strolling along tracks bordered by trees and wildflowers, interspersed with sudden sea and estuary vistas, it’s not hard to see why she loved this part of the world with a passion and why the story of a beautiful but treacherous first wife manipulating her long-suffering husband into murder on a Cornish beach might have come to mind.

Fowey itself has had plenty of dramatic moments too. People started living there in Medieval times – attracted by the small town’s proximity to the Channel and the ships sailing past. Piracy, smuggling and intrigue were certainly not uncommon which possibly contributed to a group of privateers known as the ‘Fowey Gallants’ being allowed to seize French vessels during The Hundred Years’ War. In 1457, the French had their own back when they ransacked Fowey. Thanks to Dame Elizabeth Treffry, though, who quickly rallied her men at the family home Place House, the foreigners were repelled. Molten lead was poured on them from the battlements above – forcing a quick retreat.

The Treffrys have been living in Fowey for more than 600 years and Place, with its high walls and distinctive towers, is still their private home. Thomas Treffry, the ancestor who built St Catherine’s, lived there for 54 years from 1509. Unlike his great aunt Dame Elizabeth, he didn’t have to fight invaders at his own front door but did end up spending a lot of his own money reinforcing local defences – a fact which he was keen to point out to Henry VIII’s right-hand man, Thomas Cromwell, in 1536. No reply appears to have been recorded.

Whilst the fort may have diminished Thomas’s resources, it has become a wonderful legacy. Stand beside walls that are up to 4 feet 6 inches thick and marvel at a stunning panorama which, during the summer, includes a splendid assortment of boats.

As a coastal vantage point, St Catherine’s Castle is sublime.