Hands up! Guilty as charged. Shamefaced admission coming up...

I’ve lived in Cornwall for most of my life, love the county with a passion, yet there are still hundreds of places I still haven’t visited. So, in best New Year tradition, I’ve resolved to start exploring.

This month’s little adventure took me to St Enodoc Church. Famous for being the last resting place of Sir John Betjeman and the subject of one of his many well-known poems, it’s not an easy find. After putting the postcode into my Sat Nav I ended up in Rock and the entrance to St Enodoc Golf Club. Confused but not deterred, I walked around enjoying some fabulous Camel Estuary views before a local chef helpfully put me right and I got back in the car to drive another three miles to Trebetherick.

This was the village where Betjeman’s parents once spent their annual holidays, inspiring their only child with a deep love of a place that appears to have everything – easy access to stunning Daymer Bay with its wide sandy beach, historic Brea Hill with its Bronze Age tumuli at the summit and the dramatic rocky headland of Trebetherick Point where shipwrecked remains can still be seen on the foreshore. In later years, Betjeman bought a home that overlooked the golf course, just a couple of hundred yards from the Bay. I passed it and, although there is no sign to indicate who once used to live there, I was ridiculously thrilled to find the house where he’d lived and died. 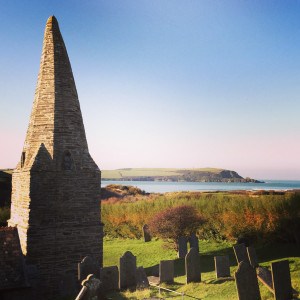 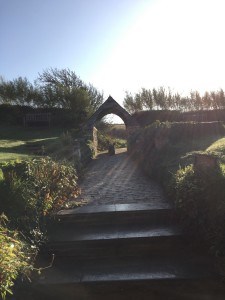 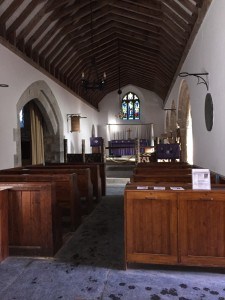 The only sign of a church when you look across the fairways from the footpath is the top half of a rather crooked spire. It took me a while to correctly identify it before putting Poppy (my Labrador) back on her lead and striding purposefully across the golf course. Surrounded by a tall hedge and sand dunes, you don’t get to see the rest of St Enodoc from the angle I was approaching until you reach the gateway in and then, like some divine revelation, it’s suddenly there in its entirety.

Graves encircle the twelfth century edifice that is said to have been built on the site where a hermit – St Enodoc - once lived in a cave. John Betjeman’s headstone is immediately to the right as you enter, others include commemorations to both his parents and Fleur Lombard, the first female firefighter to die on duty in peacetime Britain.

The church itself has a wonderfully restful feel. Almost entirely buried by sand for several generations - hence it becoming known as ‘Sinkininney Church’ – it was restored in 1863. I’m not an expert on ecclesiastical architecture but its simple design, quirky profile and the many stories cherished within its walls make St Enodoc a very special place. John Betjeman clearly thought so:

Come on! Come on! This hillock hides the spire,
Now that one and now none. As winds about
The burnished path through lady’s-finger, thyme,
And bright varieties of saxifrage,
So grows the tinny tenor faint or loud
All all things draw toward St. Enodoc.
Come on! Come on! and it is five to three.
Still, Come on! come on!
The tinny tenor. Hover-flies remain
More than a moment on a ragwort bunch,
And people’s passing shadows don’t disturb
Red Admirals basking with their wings apart.
A mile of sunny, empty sand away,
A mile of shallow pools and lugworm casts.
Safe, faint and surfy, laps the lowest tide.

Sat in a pew in that tranquil haven, I could almost imagine the Poet Laureate beside me when thinking about those lines...