When Carol, my sister-in-law, phoned to ask if I’d like to go for a walk, I resisted the temptation to opt for a place I’d seen hundreds of times before and instead suggested Coverack.

“That’s somewhere on The Lizard isn’t it?”

Like me, Carol grew up in Cornwall but had never visited the small fishing village tucked away in its own sheltered cove between Helford River and Lizard Point. Sam, my nineteen year old nephew and Poppy, my Labrador, joined us – a team of unlikely explorers setting off on what is now becoming a regular Cornish adventure. 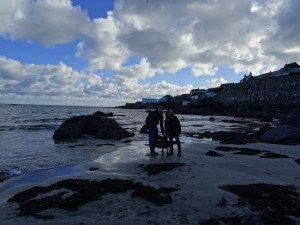 Coverack didn’t disappoint. Curved around a picturesque beach and a small, traditional harbour -that, judging by the number of seagulls swooping around some of the boats, is still a working home for local fishermen – it’s delightfully quaint and pretty. Whilst we were there it was very peaceful too but that isn’t always the case. In 1898 the steamship Mohegan was wrecked on the treacherous Manacle Rocks a short way down the coast and 106 people were drowned. A Navy vessel, HMS Primrose, was similarly sunk in 1809 with the loss of 125 lives but the American passenger liner which ran aground off Lowland Point in 1899 thankfully had much better luck and everyone survived.

Coverack is on the South West Coastal Path so wonderful vistas are guaranteed which ever sea-facing direction you take. Our route took us via the beach (Poppy had a swim), along the narrow street that leads to the Paris Hotel, into a playground that must have one of the best views from a swing in the country, past a row of whitewashed cottages and up onto a hilltop. From there we followed a track that took us around a bungalow garden where a husband and wife were busy working on a flower bed.

“How can you focus on that when you’ve got all this in front of you?” asked Carol, indicating an incredible panorama that included a vast expanse of sea, sky and cliffs.

“Not easy,” replied the man. “Every time I pass our lounge window I find myself sitting down to gaze.”
Chuckling we moved on into a more wooded area where, through a gap in the trees, a bizarre and somewhat incongruous figure made us all stop and stare. We were side-on to what appeared to be a sculpture fashioned out of pure white stone. Closer inspection revealed a seated couple, hands together in a posture that clearly spoke of lifelong love. I can only describe it as intensely moving and beautiful. 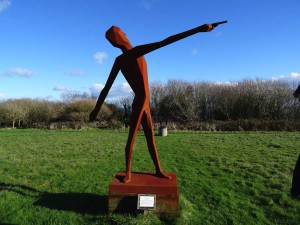 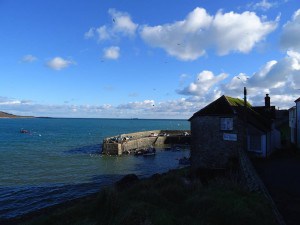 Further sculptures followed – horses, dogs, men, birds, cattle and...Reginald. Unlike the other couple, he sat alone on his bench waiting for Prudence. But where was she? According to the sculptor, on another bench, in another field, wondering where he was - just as he wondered too.

Completely by accident, we had stumbled on Terence Coventry’s Sculpture Park and I can’t recommend it enough. Terence, it turns out, attended The Royal College of Art in 1959 before turning his attention to farming – an occupation he carried out in Cornwall for 25 years until, in his fifties, deciding to return to sculpture. That was in 1985. Thirty years later he exhibits widely to great national acclaim but has still chosen to have 25 pieces on permanent display in the three meadows close to his home.

We all spent quite a long time looking at the remarkable objects, transfixed by the craftsmanship that went into making them, their meaning and the incredible setting. I particularly liked ‘J’Accuse’, a bronze of a man pointing his finger in a blatant expression of outrage and disgust.

Cornwall is full of such treasures but sometimes it takes determination and a bit of effort to resist the tried and tested and try something new. Coverack, we all agreed, was a wonderful day out. So much so, that I’m considering a staycation there.

Who needs abroad when there’s so much to experience not far from our doorstep?