Never been to... Ding Dong Mine

It was Liz, a good friend of mine, who gave me the idea of exploring an area between Madron and Morvah in Penwith. She and her husband, Ed, had been staying at The Gurnard’s Head and, making the most of the good weather, had set off on a long walk.

The public footpath they were following took them across a farm where they met the farmer who was out in his slippers beside his well. More than happy to chat, he told them that he and his wife had lived on the property for more than fifty years, that they had neither mains electricity nor water and that the well and spring which serviced their home dated back to Phoenician times and was therefore at least 2000 years old.

He also told them a tale of having once seen a little man on his land who was no more than about four feet six inches tall with a Quaker style hat on his head, knee-length socks and shoes with buckles on them. Doubting what he had seen and possibly in fear of his own sanity, he said nothing to anyone. Returning home later, his wife remarked that she thought she must be going bonkers because she could have sworn she had seen an unusually short individual gliding, rather than perhaps walking, around in a very strange outfit.

Something that really happened or a good joke at my friends’ expense? I have no idea but the friends in question are both doctors and generally view the world from a scientific, rather than a more creative perspective. Fascinated by what they told me and persuaded by their own conviction that the farmer wasn’t having them on, my sister-in-law Carol and I eagerly set off on our own adventure.

The first thing to say is that sadly we didn’t encounter any piskies or ghostly apparitions but we did pass an abandoned homestead, some dramatic carns (man-made outcrops of rock) and, after tramping quite some distance following a boggy moorland path, we did make it to Ding Dong Mine. The distinctive mine chimney had been dominating the skyline since we’d started out. Stark against the clear blue sky, it became our goal, initially miles away but gradually drawing closer as we carefully negotiated our way round large muddy pools that threatened to swamp our walking boots. Once a possible route for miners making their way to long hours of darkness underground, the surrounding moorland holds many secrets, sating as it does from prehistoric times. With sweeping views of the landscape and exposed to the extremes of weather, its potential for bleakness has protected it from most human intervention – a real blast from the past that succeeds in putting daily niggles and pressures firmly into perspective. 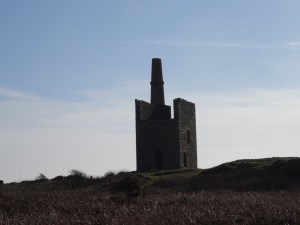 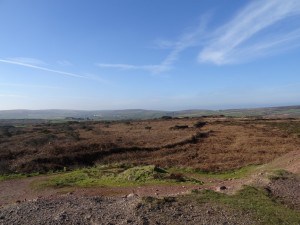 Once reached, Ding Dong doesn’t disappoint. From its high point perch, you can see for miles around, and its rain –pummelled walls serve as poignant reminder of Cornwall’s heritage and the many stories of trials and triumphs that go with it. Carol and I were fascinated by a vase of fresh flowers placed in one of the building’s nooks. Why where they there, and what moment or event did they mark? No amount of Googling afterward could shed any light on the mystery. 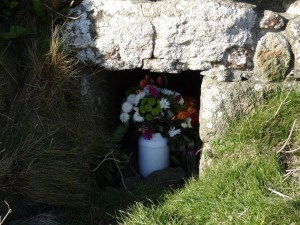 Finding the Nine Maidens stone circle that has exited my imagination from the outset of our trek proved a challenge. There are no signs to it that we could see so, suddenly coming up upon it after going down a narrow, unmarked track, felt a bit like finding Dr Livingstone. There are actually 11 standing stones, not nine, but two have fallen down. No one else was around, meaning we had the site and its millennia-old history to ourselves.

That sense of a deep-seated associated with beliefs and a culture that have, by and large, disappeared from our everyday lives, was immensely powerful and we both became thoughtful – even reverential. It was a magical, perhaps mystical moment in our journey and one, I suspect, we’ll remember.
In all, our walk took around two hours and covered about five miles. We saw a part of Cornwall we’d never visited before and, as well as having a good deal of fun, learnt a lot in the process. We may not have actually seen the little man in his pointy hat and smart shoes but, as a symbol of the past, we felt his presence everywhere.

Penwith moors are Cornwall at its wildest, most barren best. Don’t leave it as long as we did to enjoy the experience.